Now that summer is coming to an end and fall is just around the corner, it’s a good time to swap out those colorful water-ready timepieces for something more restrained. Step into the world of ultra-thin watches, where mastery is measured in how few millimeters a case height reaches. From a simpler time and date version to a complex tourbillon and a few surprises in between, here are four incredible ultra-thin watches to show us how it’s done.

“Less is more” is part of the Jaeger-LeCoultre Master mantra, even when fitted with a tourbillon mechanism. Unveiled at SIHH 2019, the new pink gold Jaeger-LeCoultre Master Ultra Thin Tourbillon is an updated version of a former favorite. While the watch retains its 40mm diameter, its height has been slimmed down to 10.77mm—impressive for an automatic tourbillon timepiece. Other than the tourbillon hypnotically oscillating at 6 o’clock (topped with a three-pronged blued running seconds indicator), the eggshell-colored dial is an exercise in restraint with a duo of slender rose gold Dauphine hands pointing to long tapered rose gold indexes. Fitted with a brown alligator strap, the new Master Ultra Thin Tourbillon is simultaneously elegant and mechanically complex.

Piaget is certainly no stranger to ultra-thin watches, having broken numerous records for the world’s thinnest timepieces since the mid-20th Century. The Altiplano collection is where Piaget houses its slender dress watches and this year the brand unveiled some new versions fitted with meteorite dials. This particular example of the Piaget Altiplano Automatic Meteorite includes a 40mm pink gold case, which slides in at just 6.36 mm in height owing to its 3.6mm thick automatic Caliber 1203P movement. The gold-colored meteorite dial features the famed Widmanstätten pattern achieved by the crystallized nickel-iron structures typical of iron meteorites. Limited to just 50 pieces, this Altiplano Automatic Meteorite is paired with a classic black leather strap.

Richard Mille may not be the first brand you think of when discussing ultra-thin watches, yet the independent watch manufacture known for making some of the most technologically advanced modern haute horlogerie watches has several slim pieces to its name. Take the Richard Mille Automatic Winding Extra Flat 67-01 for instance, which made its debut in 2016. Trimming the tonneau-shaped case down to an impressive 7.75 mm thickness was no easy feat—it started with the creation of the 3.6mm thick automatic Caliber CRMA6 skeletonized movement. While there are titanium and white gold versions of the RM 67-01, this example is fashioned in rose gold and its case band and bezel are blanketed with diamonds.

Bulgari has without a doubt taken over as the reigning monarch of extra-thin watches in recent years. Just this year, the brand announced yet another world record by introducing the world’s thinnest self-winding chronograph, further fitted with a GMT complication! The 42mm case of the Bulgari Octo Finissimo Chronograph GMT is a mere 6.9mm thick. And that super slim case houses the thinnest automatic chronograph caliber ever made, the 3.3mm thick Caliber BVL 318, which does away with a traditional rotor in favor of a platinum peripheral rotor. Emphasizing the sleekness of the watch is its monochromatic color scheme featuring a sandblasted titanium case, bracelet, and dial. Thanks to the unique blend of an octagonal case middle, round bezel, and integrated bracelet, the chronograph pushers on the right and the GMT pusher on the left almost disappear into the case. The Bulgari Octo Finissimo Chronograph GMT is an extraordinary feat of engineering that pushes the boundaries of how slender ultra-thin watches can go. 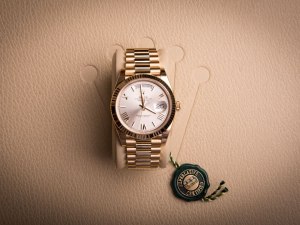 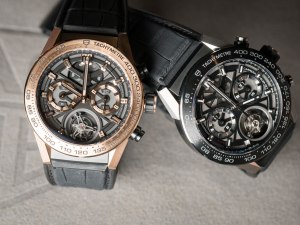