In the world of Parmigiani, the Toric is not nearly the most complicated watch the master has put together, but it might be the most significant. When we talked with Michel Parmigiani a few weeks back, he gave us an insight into what this watch means to him. Was the Toric due for an overhaul? Yes and no. The original Toric was designed in 1996, making it over two decades old, but more so, it was crafted for a different generation. That is also the biggest change with the new, or second-generation Toric: the size of the case, which now measures a very modern 40.8mm in diameter. This is not the only change the case went through, as the double knurled bezel is now reduced to just one. Interesting fact: Parmigiani still does this knurling by hand! Parmigiani knows however very well that when you make a watch larger, you should also make it slimmer, especially when you want to retain its elegant profile. By keeping it at 9.5mm, this is ensured for the new Toric. Overall the watch becomes less of a classical Roman beauty, in exchange for a more universal, contemporary elegance, in which the dial also plays an important role. By going full Arabic numerals, Parmigiani gives the watch a more dynamic look, which is amplified by the moving the date function from three o’clock to six o’clock. It now also shows coming and past date, in a more generous sized date window. While I prefer to see this on sports watches, and not so much on dress watches, Parmigiani makes it work, and work well. The contrasting background and colors of the dates most certainly play an important role in this.

Inside the watch is a movement as you would expect from a brand like Parmigiani. Manufacture caliber PF331 has a power reserve of 55 hours and was created with precision in mind. As the full name of the watch already indicates, Toric Chronomètre, it has a COSC-certification. Available in both 18K white gold and rose gold, the watch is priced at $18.500,- for either version.

Dates On Dress watches: What Date Suits You? 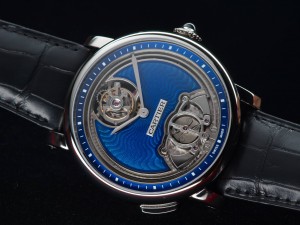