Christophe Claret: A Maestro At Work

In the world of watches does Christophe Claret holds a special status. As a master watchmaker, he developed not only many complicated pieces for other brands such as the Ulysse Nardin San Marco minute repeater, but also innovates with the brand that bears his own name. This innovation is not only mechanically driven but also aesthetically. The Maestro is a perfect example of this, especially in this gem-stone set version.

Christophe Claret created the front of the watch to highlight its most important features, namely the unique cone-shaped large date and the memory-function. They are surrounded by the pink gold bridges that secure the various movement parts, which in this particular version are set with brilliant cut diamonds. They truly stand out, not only because of the use of pink gold but also due to the black backdrop which is the main plate of the movement.

The movement is framed by baguette cut colorless diamonds and natural pigeon blood rubies, which are among the rarest type of rubies in the world. The diamonds mark the minutes, while the rubies indicate the hours, as well as every five-minute mark. Combined with the red details on the watch itself, as well as the diamond set lugs, does this result in a tantalizing creation. It is far more contemporary in appearance than most watches set with gemstones, and to this does also the sleek design of the 42-mm case contribute. A large portion of the movement parts on the dial are also extended above the case, which is quite spectacular to see, and which are protected by an equally spectacular high sapphire crystal.

The large date is displayed by two moving rings, which combined have a cone shape, topped off by a ruby. They add a three-dimensional effect to the watch, as does the other cone-shape on the dial. This one is dedicated to the memory function, which is located between three and four o’clock and more of a poetic complication. It can show either a diamond or a ruby arrow and serves as a gentle reminder which can be turned on or off by its owner. It is once again a novel approach to traditional watchmaking, which adds a unique appeal that has become a Christophe Claret hallmark over the years. 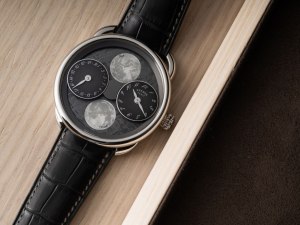 Full Moon, And The Watches That Have A Unique Way Of Showing It 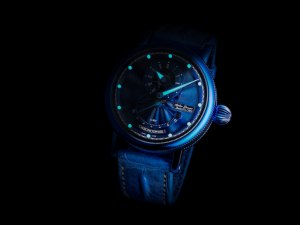