Watch Brands With The Highest And Lowest ‘Digital IQ’

The good news is that 2017 was the year that the luxury watch industry really took to eCommerce. The bad news is it still lags in this area compared with other luxury businesses. In other digital areas there is marked improvement among several brands but many others still have a long way to go.

These are among the findings from the “Digital IQ Index Watches & Jewelry 2018” report by L2 Inc., a business intelligence and research firm that benchmarks the digital performance of consumer brands. The firm produces what it calls “Digital IQ” reports for many industries, including a near-annual report for watch and jewelry brands. For the recently released survey, 70 luxury watch and jewelry brands were analyzed by the firm during 2017.

L2 ranks the companies based on their digital strengths and weaknesses in four categories: eCommerce, digital marketing, social media and mobile. The firm produces a score that it describes as the “Digital IQ” for each company and ranks them in following categories: “Genius,” “Gifted,” “Average,” “Challenged” and “Feeble.”

One of the conclusions of the report is that large, well-funded companies that already have strong brand recognition are doing much better than smaller brands. That advantage is reinforced among luxury holding companies, which again benefit from having deep pockets. The big news in 2017 among these conglomerates is the bid by Richemont to acquire the Yoox Net-a-Porter Group—an eCommerce business Richemont has a 48% stake in. The L2 report states that this “signifies a major vote of confidence in digital and the role it will play in the future of hard luxury.”

In addition to direct-to-consumer initiatives in 2017, many brands chose to partner with well-known third-party e-tailers, such as Yoox and Net-a-Porter, to distribute their timepieces. Out of the 70 brands surveyed, I looked at 48 companies that are either pure watch brands or jewelry and watch companies with significant investment in their timepiece business.

Among watch related brands, the top company was Cartier, which finished second overall in the Digital IQ survey and is the only watch brand to receive the “Genius” rating.

Far too many watch companies ended up in the bottom two categories (Challenged and Feeble).

As previously noted, brands that are part of a luxury conglomerate are largely doing better than many of their independent peers.

The Movado Group with its two luxury watch brands (Movado and Ebel) is alone in the Challenged category.

Meanwhile, Kering is the exception when it comes to digital competency among the largest luxury conglomerates. Its five watches and jewelry brands as a group fall into the Feeble category. This overall score was boosted by the company’s two jewelry brands (Boucheron and Pomellato), which ranked as Challenged. Its three watch brands–Ulysse Nardin, Girard- Perregaux and JeanRichard–were ranked as Feeble. 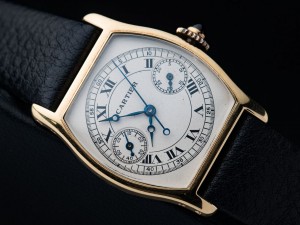 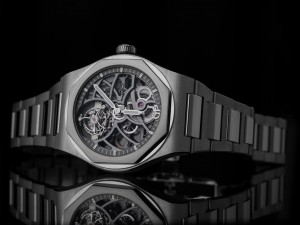 A Look Inside The Girard-Perregaux Laureato Flying Tourbillon Skeleton