Marking the first time Ulysse Nardin exhibits at the SIHH in Geneva instead of in its nautically inspired exhibition space at Baselworld, the innovative brand celebrates with the unveiling of the unusual InnoVision 2 timepiece chocked with 10 innovations, and 10 patents.

Ulysse Nardin has long been known for its pioneering spirit and avant-garde design, as well as for its technical mastery in the world of haute horlogerie. After all, this is the brand, along with inventor Ludwig Oechslin’s help, that pioneered the use of silicium in watches; it is the brand that developed the revolutionary Dual Direct escapement concept (changing the need for traditional anchors and escapement wheels) by channeling energy via silicium wheels, and this is the brand that bought us the now-famed and highly sought after Freak watch that went on to utilize DIAMonSil material in its movement. In the same year that DIAMonSil in the Freak made its appearance, 2007, so did the InnoVision 1 – a watch that used LIGA technology along with Deep Re-active ion etching and other processes for the design of movement parts.

Today, under the direction of CEO Patrik Hoffmann, Ulysse Nardin unveils the InnoVision 2 — a milestone self-winding timepiece with 10 dynamic innovations that are incredibly complex and predominantly of interest to the most die-hard collectors. Here we bring you a brief look at just a few of these key innovations that have patents pending.

In any mechanical watch, the escapement is responsible for preventing unrestricted unloading of the spring mechanism and for transferring regular pulses to the oscillating system. The Dual Direct escapement in this watch is a sophisticated double constant force silicium structure that transmits the pulses to the balance wheel and hairspring wit equal force. This is made possible via flexible pre-tensioned silicium blades designed to absorb energy and release it accurately until the power of the watch is drained. The dual constant force escapement is an evolution of both Ulysse Nardin’s Dual Direct escapement and Ulysse anchor; it has a patent pending.

Ulysse Nardin turns to DRIE (Deep Reactive Ion Etching) to produce the escapement element from monocrystalline silicium. Essentially, the process starts out with two parts that must then be bonded via a process that compresses a bond via ultra-high temperatures and joins the vertical surfaces, making two parts one. This is also a patent-pending process.

In the InnoVision 2, Ulysse Nardin uses silicium, which has a density 3.6 times lower than Glucydur, for balance wheel and balance spring. Silicium is non-magnetic, shock resistant and flexible, making it a great material choice without compromising quality. The balance wheel is equipped with four paddles to offer constant precision; the balance wheel has a patent pending.

To eliminate idling and drag in the watch’s winding, Ulysse Nardin radically redesigned the InnoVision 2’s self-winding mechanism. The new Grinder self-winding mechanism system offers increased efficiency and transforms tiny amounts of kinetic energy into potential energy so there is virtually no idling. The ingenious new system has four (instead of two) levers for consistent energy and holds one patent and has another pending.

Ulysse Nardin, in collaboration with the EPFL High School of Lausanne and Sigatec, has developed an innovative and patented method for coating silicium with a thin film of sapphire to make the material even harder. The InnoVision 2’s elongated center wheel bridge is made from this material, endowing it with harder surfaces and a higher mechanical stability.

Additionally, Ulysse Nardin manufactures the balance cock and the entire integrated shock protection system from glass, which also helps to eliminate friction. Working in glass gave the brand the opportunity to mill slight channels into the material and fill those channels with Super-LumiNova for an impressive light effect in the dark. There is a patent pending for this process.

Finally, when it comes to looks, InnoVision 2 boasts a bold three-dimensional glass sculpted minute hand that features precision laser cutting. Ulysse Nardin has also taken a new look at time indication with the InnoVision 2. The display represents the hours 1 to 11 in apertures on the dial. When the morning hours are complete, the inner ring on which the numbers is printed is moved by the large barrel and the numerals 13 to 23 appear digitally in the apertures. It takes 15 minutes for the rings to switch and they are moved via a back-and-forth motion. Essentially, one ring holds all the numbers and moves at the appropriate time. Ulysse Nardin has applied for a patent for this time display. 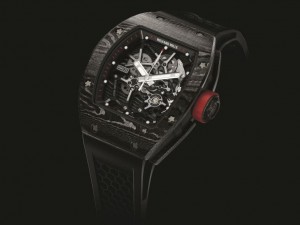 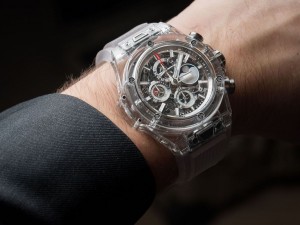