Taking roots from its quintessential DNA, but embracing the technologies of the future, INFINITI has unveiled the electrified and speedy Prototype 10 at the Pebble Beach Concours d’Elegance. The project is the first under the brand’s new Executive Design Director, Karim Habib, overseen by INFINITI’s Japan design centre, though digitally designed in the U.K. and hand-crafted in San Diego, California.

“We all feel a certain degree of passion when talking about roadsters and speedsters,” began Roland Krueger, President at INFINITI. “We are equally passionate about the potential that electrification holds for the future of our cars – a daring speedster is the perfect study for our designers to explore an electrified future and ignite such excitement.”

Reimagining the classic speedster, the Prototype 10 is ahead of its time, inspired by the brand’s desire to showcase its fleet of high-performing production vehicles of the future. It also takes a driver-centric approach, with the monoposto (single-seat) cockpit.

“The INFINITI Prototype 10 echoes the layout and design of early speedsters,” noted Habib. “This period saw the creation of some of the most evocative car designs of all time, where power was celebrated through high-powered single-seat competition cars. Our new concept speaks of an electrified future, something which is reflected in its form and details. It is appropriate that we found inspiration in an optimistic bygone era in which cars were characterized by the simple love of driving.”

The Prototype 10 is also a representation of the brand’s promise to offer pure electric and e-POWER vehicles by 2021—embracing ultra-low emissions technology without sacrificing thrilling performance.

In terms of design, the vehicle’s INFINITI Q Inspiration is clear, with its elongated body, clean lines and the coupé-like sedan aesthetic. It uses straight lines, modern shapes, a long bonnet, an open cockpit and an eye-catching fin behind the driver’s seat, all elements that allude to its high performance.

“We were drawn to the idea of outlaw racers adapting their own cars for grass-roots racing,” added Habib, regarding the design. “Cabriolets become roadsters and speedsters with the removal of the roof, or by fitting a smaller, swept-back windshield. Many owners even covered the passenger bay to create a monoposto competition car.”

The interior is just as eye-catching as the exterior, especially with the steering wheel mounted on lightweight carbon fiber—rather than an intrusive steering column—due to the steer-by-wire Direct Adaptive Steering technology. Trimmed in black leather with red stitching, the very low, single seat matches the center of the wheel, while the side and hip bolsters provide support.

The Prototype 10 is most importantly, a nod to the brand moving toward having all new models with electrified powertrains by 2021. With technological innovation being one of the pillars for INFINITI, this shift makes sense. e-POWER models will also not require external charging sources, though they will still provide drivers with high level driving experiences.

For more information, please visit the brand’s website. All images courtesy of INFINITI. 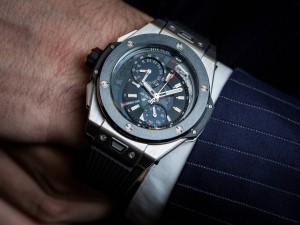