To kick off the Luxe & Leisure weekend and to celebrate the continued philanthropic efforts and accomplishments of entrepreneur Barry Skolnick, Haute Living, together with Swire Properties Inc. and Ulysse Nardin, held an exclusive VIP cocktail party followed by a dinner at Brickell City Centre. In addition to his continued charitable endeavors, Mr. Skolnick made the largest single donation toward Mount Sinai Hospital, creating the recently-unveiled Skolnick Surgical Center in Miami Beach.

To begin the evening, guests were welcomed with a cocktail party in front of the Brickell City Centre Westime Boutique, where Mr. Skolnick’s incredible lineup of personal automobiles as part of his new company, Iconick Motors, were beautifully arranged, such as a McLaren Senna, Ferrari F12 TDF and an orange Maserati MC12. Guests sipped on Whispering Angel rosé while they enjoyed the car display, before heading to one of the penthouse units of the attached Reach Residences building.

Inside penthouse 4203, a striking display of Ulysse Nardin timepieces were lit up on stand-alone vitrines as well as on the two long form dining tables, including the brand’s latest edition making its U.S. debut, the Skeleton X Magma. Guests nibbled on light bites and continued to enjoy custom cocktails and Louis Roederer Champagne, while perusing the gorgeous property’s interior and exterior spaces, with its expansive outdoor balcony on the perfect Miami evening.

Soon after, the guests were seated for dinner, at which point, Haute Living CEO Kamal Hotchandani took to the front of the room to thank everybody for coming and to remind guests that the timepieces on display were also for sale. U.S. President of Ulysse Nardin François-Xavier Hotier also announced that a percentage of watch sales for the evening would go towards Mr. Skolnick’s charitable foundation, elevating the philanthropic nature of the evening to the next level. President of Swire Properties Inc. Kieran Bowers also thanked the guests in attendance and Mr. Skolnick, expressing his warm sentiment for the special evening of acknowledgment.

As guests enjoyed their delectable meals from MG Events, which included a selection of passed tapas, a portobello caprese tower, a surf and turf with braised short rib and pan-seared snapper, paired with Domaine Anderson Pinot Noir, a video played on various screens throughout the room, touching a little bit upon Mr. Skolnick’s charitable work. Mr. Skolnick then took to the front of the room with fiancée Missy Brody, as the Commissioner of the City of Miami Beach Michael Góngora had a special surprise for the entrepreneur/philanthropist, presenting him with a special proclamation declaring May 17th, 2019 “Barry Skolnick Day.” Haute Living also presented Mr. Skolnick with a ‘Philanthropist of the Year’ award, while Eternity Gallery’s Alexandre Sarfati gave the couple a special piece of custom artwork to mark the occasion. Mr. Skolnick then addressed the crowd, expressing his gratitude and how touched he was for the recognition and the evening.

As the night continued, guests continued to sip on delicious cocktails courtesy of Shaw-Ross International, peruse the selection of gorgeous Ulysse Nardin timepieces and listen to the music from the DJ behind the Ulysse Nardin shark-emblazoned DJ booth, while enjoying the beautiful Miami evening.

All images courtesy of Romain Maurice for Haute Living. 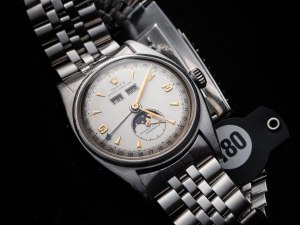 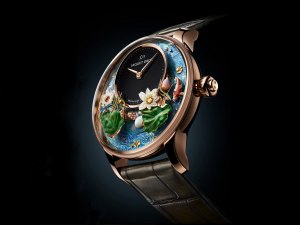