Full Moon, And The Watches That Have A Unique Way Of Showing It

A full moon has captivated humankind since the beginning of time. It is an event that is surrounded by myth and folklore. Even in the watch world, is the moon phase one of the oldest, and highly regarded complications, which is best enjoyed on a night like today, when it is a full moon.

MB&F MoonMachine 2
With the Horological Machine Nº8 did MB&F present yet another captivating creation. Not many watches show the time in a projected way. Pushing the envelope even further is the MoonMachine 2, which is based on the Horological Machine Nº8.  The Swiss brand included, for the first time, a projected moon phase. The projection is created using a prism which vertically reflects the different displays. MB&F collaborated with Stepan Sarpaneva on this project, whose charismatic signature golden moon can not only be found in the moon phase display but also on the titanium rotor on top of the watch.

Rolex Cellini Moonphase
A Rolex with a moon phase is a true rarity, as even throughout the history of this iconic brand it is a complication that rarely appeared in their catalogs. For the Cellini Moonphase Rolex opted for a 39mm case crafted from proprietary Everose gold, which has a beautiful rich tone. This offers a pleasant contrast with the white dial, in which the moon phase indicator has a prominent place at six o’clock. The moon itself is resembled by a small disc made of meteorite. A nice touch is also the date, which indicated on the circumference of the dial by a blued hand. All these elements combined make of the Cellini Moonphase an instant classic.

Hermès Arceau L’Heure De La Lune
One of the hottest watches introduced this year at the SIHH was the Hermès Arceau L’Heure De La Lune. The French brand takes a novel approach to the traditional moon phase display by having the moon (or in this case moons, as it displays the current moon phase on both the Northern and Southern hemispheres simultaneously) in a fixed position on the dial, with the time and date displays travelling over them, showing the correct phase. Both moons are surrounded by meteorite, which unique texture adds further to make this watch a true eyecatcher.

A. Lange & Söhne Grand Lange 1 Moon Phase “Lumen”
A. Lange & Söhne is not exactly known for their sports watches, yet the Grand Lange 1 Moon Phase “Lumen” might be the one that comes the closest to this. The dial is largely translucent, which allows you to see part of the mechanics that make this watch such a treat and add to its dynamic looks, yet also contributes to this watch in another, rather special way. The moon phase disc in this watch is fully coated with a luminous compound and has 1.164 stars engraved in it to accompany the moon. While it looks great during daylight, it is spectacular at night when the whole moon phase display lights up. The large date has gotten the same treatment and together with the hands, Roman numerals and hour indexes does this result in one spectacular watch and makes it that you cannot wait until the next full moon comes around. 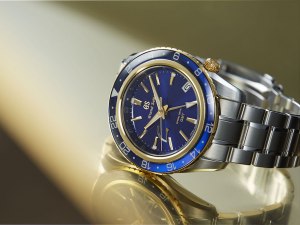 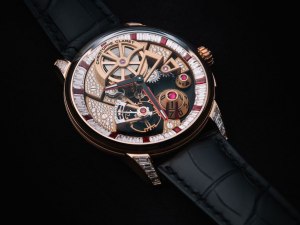 Christophe Claret: A Maestro At Work