Long before all the hype surrounding Rolex Daytona “Rainbow” watches, the Crown already had a history of producing special gem-set Daytona chronographs using a mix of precious and semi-precious gemstones. Case in point is this exceptional diamond and ruby Rolex Daytona with a rich garnet dial—a piece hardly ever seen out in the wild due to its scarcity.

As many of you may already know, it was in the year 2000 that Rolex introduced its first Daytona chronograph collection equipped with an in-house movement, the Caliber 4130. Prior to that, the automatic Daytona ran on modified Zenith El Primero movements. And even earlier than that, the Daytona lineup housed manual-wound chronographs with modified Valjoux movements inside their cases. So, a manufacture movement for Rolex’s signature chronograph collection was a very big deal indeed. Almost two decades later, the Caliber 4130 is still regarded as one of the best automatic chronograph movements on the market.

One particular standout model is this diamond, ruby, and garnet Daytona 116589. The 18k white gold case sports the familiar Daytona silhouette, measuring 40mm in diameter and fitted with a pair of screw-down chronograph pushers flanking the winding crown. However, what is different is that instead of the ubiquitous tachymeter scale, the bezel is set with 24 baguette-cut rubies. Regardless if gem-set watches are for you or not, Rolex’s expertise in gem-cutting and gem-setting is always incredibly impressive to see up close. Make no mistake, to source, cut, and set this many identical rubies in exactly the same color, size, and shape on one watch is no easy feat.

The sumptuous shade carries on with the grossular garnet dial featuring a striking textured look characteristic of natural stones. Rolex has also had a long history of using exotic hard stones for their watch dials as illustrated by both vintage and modern examples. Sitting on that rich garnet dial are eight diamond hour markers to accompany the 18k white gold applied 15, 30, and 45 minutes/seconds markers. Of course, also on the dial is the customary trio of subdials to indicate the running seconds, 30-minute chronograph recorder, and 12-hour chronograph recorder. Finally, completing the cherry-esque colorway of the watch is the Bordeaux colored alligator strap fitted with an 18k white gold deployant clasp.

Far from the multi-colored sapphire-set Daytona models that are so popular today, this Daytona 116589 is proudly monochromatic in design, yet just as precious. 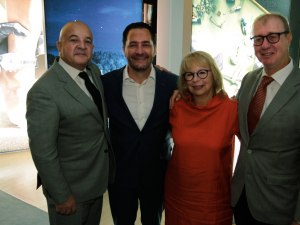