The Hottest Skeletons For Your Closet

Halloween is here again, and that means that it is time to don yourself in your scariest outfit and celebrate. Details often make the difference between a good outfit and a great one. Watches hardly ever play a role in Halloween costumes, but that doesn’t mean that there aren’t any watches that couldn’t play the part. These four watches would fit right in during the holiday, but will also be the rest of the year a ‘skeleton’ you gladly have available in your closet.

Santos de Cartier Skeleton Noctambule
The Noctambule has to be the most sinister Santos that Cartier has in their current collection. Its case has a black ADLC coating, and also the skeleton movement has a dark finish. This is only when it is light because the bridges are treated with a luminous material that shines brightly in low-light conditions. This is quite a spectacular sight, especially since the bridges are shaped like Roman numerals, a signature feature of many skeleton watches by Cartier. Underneath, you can admire all the parts that make this watch tick. As a finishing touch, it is fitted with a matte black alligator-strap, making it the perfect companion for Halloween. Cartier also supplies this watch with a dark grey semi-matte alligator strap, to which you can easily change to thanks to the “QuickSwitch” interchangeability system when Halloween is over.

Ulysse Nardin Executive Skeleton X Carbonium Gold
The Executive Skeleton X Carbonium Gold is another watch that likes to show it all. Ulysse Nardin not only sandwiched the movement between two frames but also made the case distinctly differently. It is crafted from carbon with gold put into the mix. This results in a stunning texture that brings this watch to the next level. Beautiful details are plentiful with this watch, as not only part of the gear train seems to float in mid-air, but also the balance wheel is extensively skeletonized. It is crafted, just like part of the gear train, from silicium, a material that needs no lubrication and is unsusceptible to magnetic forces, increasing the precision of the watch. With a power reserve of four days, we wouldn’t be surprised if this ultra-light Ulysse Nardin becomes one of the favorite skeletons in your closet.

Graff Structural Tourbillon Skeleton Automatic
Graff takes the term skeleton very seriously and goes as far as to even skeletonize the case of their Structural Tourbillon. While the lugs and inner case are crafted from rose gold, the skeletonized outer sections are made from titanium with a black DLC coating. The contrast that this gives the watch looks very good. For the movement itself does Graff also utilizes bridges made of sapphire. This gives new meaning to the term ‘flying tourbillon,’ with which this watch is fitted as well. The mainspring barrel is also skeletonized so that in it you can see the mainspring itself. With some practice, you can even determine pretty accurately how much of the 72 hours power reserve is left, adding another fun-factor to an already imposing watch.

Girard Perregaux Neo-Tourbillon Skeleton with Three Bridges
One of the most significant historical pieces of Girard Perregaux is the tourbillon with three gold bridges, which was initially launched as a pocket watch, but later became also available as a wristwatch. While visually imposing, the brand has also taken this concept into the modern age as the Neo-Tourbillon Skeleton with Three bridges. Crafted like the bowties of Dracula, three bridges hold the mainspring barrel, gear train as well as the tourbillon. A white gold micro-rotor, expertly integrated into the design, powers this watch. The case itself is generous, with a diameter of 45mm, but here did Girard Perregaux also made a contemporary choice by choosing titanium, which keeps the weight down. Its design is quite sober, emphasizing the great movement, which will make this watch a real eyecatcher and an unusual skeleton for you to not only keep in your closet but also to take out and wear it, Halloween or not. 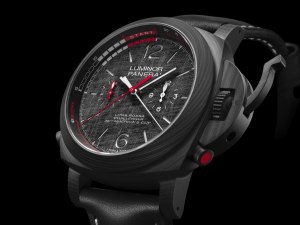 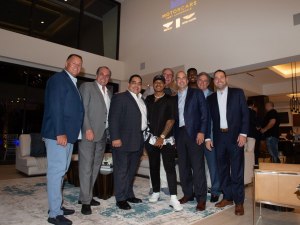