Re-creations: Hot Or Rather Not?

The truth is, nothing beats the original. However, when it comes to watches, some of these original creations are so rare and precious that you either have a hard time finding one or that its prices have sky-rocketed, most likely even both. As they are very desirable, demands outstrip supply, and then it actually makes sense from a business perspective that the brands who originally produced the watch, launch a re-edition. While these are commercial enterprises, it also highlights an often important part of their history, while it gives their clients the opportunity to own something as close to the original as they can get.

The way that brands approach this differs. In 1969 Omega created a special gold Speedmaster to mark the success of Apollo 11, and gifted one to each of the active astronauts of NASA. For many Speedmaster collectors, this watch has become a true grail and this year Omega decided to launch a re-edition, to mark the 50th anniversary of the moon landing. For this watch, they remained  very close to the original, yet with a few modern-day modifications. The bezel is now made of ceramic, the gold from which the watch is crafted is not yellow gold, but the special Moonshine gold alloy that Omega developed and of course is also the movement upgraded from the original, in this case featuring a co-axial escapement as well as a Master Chronometer certification.

An upgraded movement is almost always the case when a brand launches a re-edition. A good example of this is the Navitimer Ref.806 1959 Re-edition. Breitling went to a lot of trouble to make it look just like the original. Its dimensions are exactly the same, as is the domed plexiglass above the dial. Some concessions have been made though, as the construction of the case is updated so that there is increased water resistance. While the watch is manual wind as was the original, it’s chronograph calibre is based on the modern-day Breiling calibre 01. Another part where this watch is different from the one from 1959 are the numerals. These are now filled in with Super-Luminova, which Breitling slightly tinted to match that of a vintage watch. Some purists are against these practices, yet it is hard to deny that it is a far better match with the overall design.

Blancpain also opted for using many modern-day materials when it brought back the first edition of their Air Command. Compared to the Breitling and even the Omega, is this Blancpain a true rarity as reportedly only 12 have ever been made. Unlike Breitling, who even made sure that the number of beads on the bezel was the same as with the original, did Blancpain take some creative liberties. While the watch has the same charm, the legibility of the dial is improved by extending the tachymeter and minute/seconds scale outside of the subdials. For the back, Blancpain went for a completely different route. Instead of opting for an enclosed caseback as the original has, they showcase the beauty of calibre F388B and finish it off with an oscillating weight shaped like a propeller. While some might consider this a bridge too far, it adds, in fact, a fun part to a watch while the front remains quite faithful to the original. As many of us will never see, let alone wear, an original Air Command due to its rarity, the questions remains if this is something that you appreciate, or prefer that they wouldn’t have, and that is a very personal question. 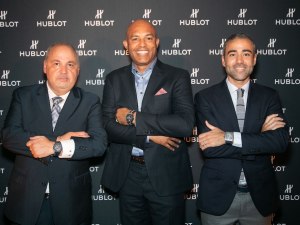 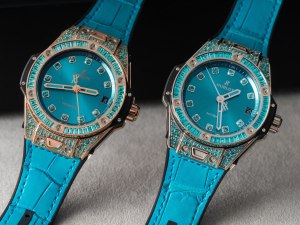 Turquoise Timepieces To Indulge In This Season