Watches that can display more than one timezone remain popular. This is not so surprising as we not only travel more and more, but as the world becomes more interconnected, we also deal more frequently with people and businesses located in other parts of the world. Next to its practical use do watches that display more than one timezone often also have a dynamic look to them, one that almost entices you to go out and explore new parts of the world. The following four watches do just that, and are for us among the hottest GMT watches launched this year;

Rolex GMT-Master II
Rolex launched the new GMT-Master II at this year’s edition of Baselworld. It is an update of the very popular ‘Batman, ‘ with it’s signature black and blue GMT-bezel. The watch is now equipped with manufacture caliber 3285, which is fitted with a Chronergy escapement and a more efficient gear train. It also has a longer power reserve, now lasting 70 hours. The main visual difference is the Jubilee-bracelet, which is today the hallmark of the most desirable stainless steel sport watches that Rolex makes.

Grand Seiko Spring Drive Chronograph GMT SBGC230
Grand Seiko hit a home run this year with the Spring Drive Chronograph GMT SBGC230. This bold creation features a case made from 18k rose gold, which goes particular well with the angular design of the case. On the wrist, it feels substantial, and has a nice heft to it, but this Grand Seiko is more than just beautiful. It combines a chronograph with a GMT function, which are both particularly precise for a mechanical watch thanks to the Spring Drive technology, which is celebrating this year its 20th anniversary.

IWC Pilot’s Watch Timezoner Spitfire Edition “The Longest Flight”
For IWC it was earlier this year at the SIHH all about their pilot’s watches. Among the many new models that where introduced was the IWC Pilot’s Watch Timezoner Spitfire Edition “The Longest Flight”. In this watch, the patented Timezoner mechanism is combined for the very first time with a manufacture base-movement. With this IWC, you truly have the world around your wrist and can set the second timezone display by simply moving the rotating bezel. This is especially handy for Matt Jones and Steve Boultbee Brooks, who fly around the world in a Spitfire, with the support of IWC and to which this limited edition of 250 watches is dedicated.

Cartier Privé Tonneau Skeleton Dual Time
Who says that a watch that shows more than one timezone cannot look elegant? With the Tonneau Skeleton Dual Time does Cartier prove that this can indeed be the case. Next to being visually very tempting, is this Cartier also a technical delight. One movement powers both sets of hands. Because the watch is skeletonized, you can see all the parts that make this possible. Yet for Cartier, it is not form over function, as also this watch can be read at an instant no matter where on the globe you are. 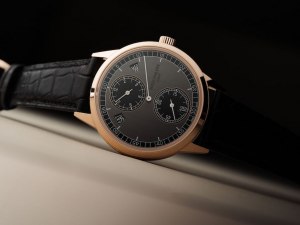 5235/50R; Patek Philippe’s Annual Calendar That Dares To Be Different