The Tonneau is one of Cartier‘s oldest wristwatch designs that is still in production today. It was launched in 1906, two years after the legendary Santos was introduced. Unlike the Santos, has the Tonneau spend most of its career outside of the limelight. In its early years, it was made in small numbers, often on request and as of 1998, it was part of the legendary CPCP-collection, which La Maison discontinued in 2008.

The Tonneau is a watch with very elegant lines and a surprisingly narrow strap. Do not be fooled by them, because on the wrist it is a very masculine creation. Its beauty can be found in the fact that the case is slightly curved, which makes it that it sits very well on the wrist. In the last few years, Cartier has made quite a name for itself with its skeleton movements, and they now extend this to the Tonneau as well. It is one of the very first members of the new Cartier Privé collection and inspired by the Double Fuseau, a watch that cleverly utilized the shape of the Tonneau to display two timezones.

The Tonneau Skeleton Dual Time does this as well, but in a slightly different way as it is not fitted with two separate movements, as its predecessor, but with just one. Caliber 9919 MC is responsible for this. It is a manual wind movement with a power reserve of 60-hours and as its name already indicates, completely skeletonized. The crown at the top, set with a sapphire cabochon, can be used to set and wind the watch. The lower one is actually not a crown, but a pusher which advances the hour hand of the bottom dial in one-hour increments each time it is pushed.

As the case of the Tonneau is curved, so is the movement. This makes it that the gear train is also set at an angle, a feature rare in watchmaking. Also interesting to note is that the typical railroad track of both dials is printed on what is the two top bridges of the movement. This gives the Tonneau a distinct, slightly technical character, while it remains true to its vintage roots. This makes it the perfect time-traveler, not only as a loyal companion when you travel yourself, but also in how the design was created over a century ago, yet is still relevant in today’s time. 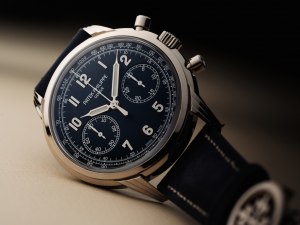 Patek Philippe Welcomes The 5172G As Its New Hand-Wound Chronograph