The biennial Only Watch charity auction is gearing up for the 2019 edition, slated to take place in November. For those who are not familiar with this event, Only Watch auctions off one-of-a-kind models created by some of the best watch brands in the business with proceeds going to fund research on Duchenne Muscular Dystrophy. The event takes place every two years under the patronage of HSH The Prince of Monaco and the past seven editions have seen over 50 brands participate and over CHF 40 million raised. Just prior to the unveiling of the Only Watch 2019 collection, we thought it would be fun to recap the five biggest money makers of Only Watch 2017.

While MB&F’s offering for the 2017 Only Watch event was based on the Horological Machine N°8, this edition was unique thanks to its special sapphire crystal pane, which featured an engraving of a drawing done by 15-year old Cassandra. What’s more, the white gold and titanium watch also included a sculpted elephant positioned in between the hour and minute windows based on the young artist’s sketch. Finally, the customary MB&F logo was replaced with a happy face to elicit even more joy.

Tudor’s collaboration with the 2017 Only One was also based on a existing model but with a few twists to make the watch unique. The Tudor Black Bay Bronze One included a left-hand winding crown rather than the traditional right side positioning. Furthermore, Tudor used a khaki green colorway for the watch’s dial, bezel, and fabric strap, which complements the bronze components nicely. Plus, there’s also the engraving on the back of the watch with the inscriptions “BRONZE ONE” and “PIECE UNIQUE.”

Although the Tudor Black Bay Bronze One was not the most expensive watch to sell at Only Watch 2017, it surprised everyone by blowing its pre-sale estimate of CHF 4,500 – CHF 5,500 out of the water with a final price of CHF 350,000!

Audemars Piguet brought a Royal Oak Perpetual Calendar in full black brushed ceramic to the Only Watch 2017 auction block. What differentiates this piece from the standard black ceramic RO Perpetual Calendar is a special dark blue color called “Skylight,” complete with a moon in a rich orange color to mimic the last few moments before sunset. There’s also the ceramic caseback—a first for AP—engraved with “UNIQUE PIECE.”

Rather than just fitting an already existing model with a new dial or using a different material, F.P. Journe created something completely new for Only Watch 2017. The F.P. Journe Monopusher Split-Seconds Chronograph is truly a unique piece with a 44mm tantalum case housing a blue dial with colorful details. Additionally, the movement powering the split seconds chronograph watch is also entirely new and craft from rose gold with steel accents.

Given that not only is this an F.P. Journe watch but also a limited edition of one piece, it comes as no surprise that the watch sold much higher than its modest pre-sale estimate of CHF 200,000 to CHF 400,000 for a final hammer price of CHF 1,150,000.

For 2017 Only Watch, Patek Philippe took their triple complication Ref. 5208—featuring a minute repeater, monopusher chronograph, and a perpetual calendar—and fashioned it in titanium. If you are familiar with Patek Philippe, you will know that the manufacture hardly ever uses titanium to make its watches. Contrasting with the white metal are the rich blue dial and blue strap. 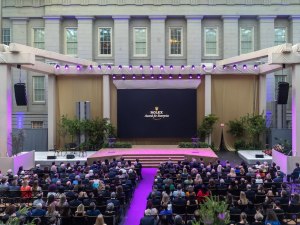 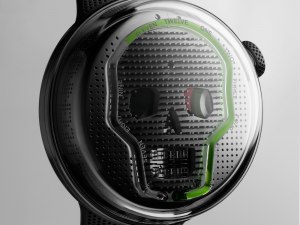